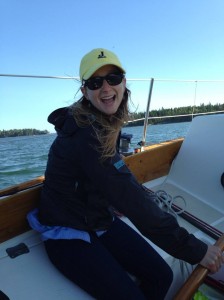 Jennie began sailing in Michigan, Maine, Southern California and Catalina Island during her childhood. July months were spent playing tennis and golf, swimming, and sailing on Lake Michigan in Prams, Sunfish, and Lido 14s. In August her family would go crab fishing off of her grandparent’s Cal 27, cruise on pinky schooners, and pick blueberries in Sedgwick, Maine. Her summers would end on Catalina Island where she camped, hiked, rock climbed, and raced Optis out of Howlands Landing. Jennie loves the J/105’s and has spent a few summers racing with members on Wednesday nights. Even though most will see her in the office, she’s willing to take-up any opportunity to get outside and go sailing!