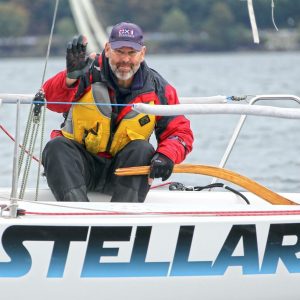 Alan is a Seattle native who learned to sail at summer camp on Lake Whatcom as a child.  He fell in love with sailing when he was supposed to be in college, and he likes to say he “crammed 4 years of college into 7 years of sailboat racing experience.”  He and his wife have owned several boats and have chartered extensively in the Mediterranean and Caribbean since. When his two sons went off to college, he found himself without a boat, and joined the Seattle Sailing Club and became actively involved in the racing program. He took a sabbatical from his law practice in 2014 and spent much of it cruising and racing in the Caribbean. Upon returning to his firm, he decided that life is short, and you should do what you love.  In 2015, he retired from the law and received his ASA instructor qualification and Coast Guard 50-ton Master’s license.  He teaches ASA 101, 103, 104, 105, & 106. When he’s not teaching, you’ll find him racing his J/80, Stellar J, with his sons as crew.