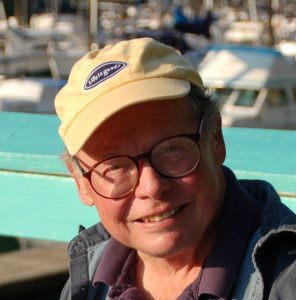 My early years were spent around boats on Lake Erie near Cleveland Ohio. My first boat was a “Thistle” an 18-foot day racer. After a five-year action-packed stint in the Navy as a Naval Aviator Carrier Pilot, living in New York near Long Island Sound, I acquired a 25-foot cruiser/racer, read the “Glenans Sailing manual” and went sailing. This lead to 20 years of serious Ocean Racing on larger yachts (up to 70 feet) on the East Coast and the Caribbean including two Newport to Bermuda races and a transatlantic race to Bayona Spain. Thirty years ago I moved to Seattle and acquired an Islander 37 sloop which I owned for 20 years and cruised extensively from Seattle north through the San Juan Islands, British Columbia, Vancouver Island and the Gulf Islands. It has been a life of love and adventure with the best friends one could ever imagine. Somewhere along the way, I obtained a 50-ton masters certificate.  Go sailing, you will never regret it.