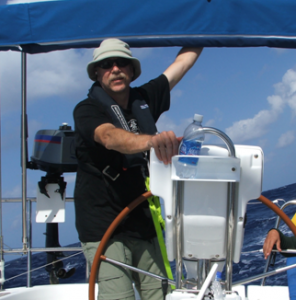 The son of a submarine captain, Don Langlois, has been an outdoorsman since childhood.  His first camping trips were at the age of eleven; first canoe adventure at age sixteen, and since then has been active in outdoor adventures of all kinds.  He has trained and worked as a guide in backcountry skiing, sea kayaking, rafting, mountaineering and canoeing and worked as an Outward Bound Instructor and National Park Service Ranger in Mt. Rainier National Park.  He is also a professional mariner, 100 Ton Masters licensed officer in the United States Merchant Marine.  He has sailed the North Pacific on an oceanographic ship, worked tugboats through the Bering Strait, and other vessels in waters from the Arctic coast to the California coast.  He has worked as a sailing instructor and sailboat yacht delivery skipper on the west and east coast to the Caribbean.  He is a sailing instructor

Based in the town of Greenwater, Washington for the past 30 years, Don has published articles and performed public slide shows about his adventures.  He is currently writing a book about Mount Fairweather, a giant Alaskan coastal peak which he climbed on an expedition.  He owns and directs Ridge Explorations, an outdoor adventure company offering an avalanche safety education program, backcountry ski guiding, sailing instruction, guided canoe trips and more.