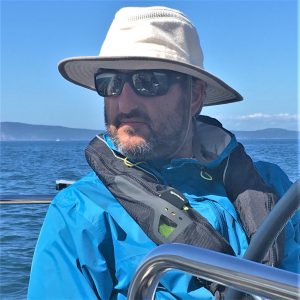 Nojan grew up sailing on the San Francisco Bay as a teenager. He fell in love with sailing instantly and it has become a lifelong passion of fun, friendship, and learning. Nojan finished the series of ASA courses right here at Seattle Sailing School after moving to Seattle in 2001. This club has opened many doors, provided new experiences, friends, and life changing opportunities. Nojan has been active in the racing community in and around Puget Sound since 2003, racing boats from 18 feet to 46 feet, with the bulk of his time spent racing his J/24 “Djinn” on Lake Washington, Puget Sound and around the Western U.S.  Nojan loves racing on boats big and small and has learned more about sailing than he ever imagined possible through the incredible community in Seattle.

Sailboat cruising has also been a passion; with his family they have explored the Salish Sea from Olympia up to Vancouver, B.C. Nojan holds a 25 Ton Near Coastal Master’s License (100 miles offshore), with sailing and towing endorsements.  Nojan is a lifelong student of all topics related to seamanship: Radar, Marine Weather, Coastal and Offshore Navigation, marine electronics and communications, rigging, and diesel engine repair. In the last year Nojan has sailed on an 1,100 mile offshore passage from New Caledonia to Brisbane, Australia aboard a Swan-Neal’s Mahina Tiare III. He has completed the Safety-at-Sea two day Seminar and is preparing to sail his cruising boat around the world.  Nojan looks forward to sharing his passion and knowledge of sailing with all students.