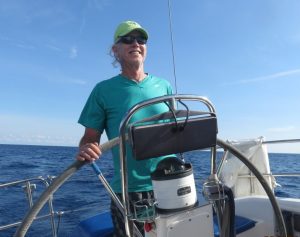 He has owned a variety of sailboats and started racing one-design Santana 20s and the PHRF fleet in the early 1980s. He helmed and crewed on boats in races to the Channel Islands and Mexico. He and his family moved to Pacific Northwest in the early 1990s. Over the years, he helmed and crewed several one-design and PHRF races in Lake Washington and Puget Sound. Recently, He has crewed on several deliveries to/from the Caribbean to the east coast and the Gulf of Mexico, accumulating over 3,000 miles offshore.  He currently teaches introductory sailing at The Center for Wooden Boats and ASA 101 at Seattle Sailing Club in Seattle. He is USCG licensed Master 50 GRT inland, endorsed Auxiliary Sail, and a license for OUPV operator upon Near Coastal Waters, not more than 100 miles offshore. Chip enjoys hiking, skiing, and wooden boatbuilding.