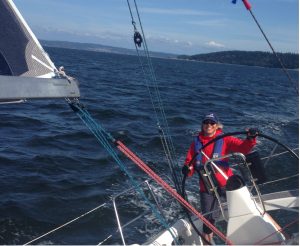 I learned to sail on Lake Michigan in 1991 while living in Milwaukee. Upon moving to Seattle in 1996 I was a volunteer instructor at the Center for Wooden Boats for 3 years until I joined the Seattle Sailing Club in 1999. I took all my ASA classes through the club, got involved with racing through the club and took my first cruises through the club. In 2014, I obtained my USCG Captain’s license and got certified to teach ASA 101 and 103 through the club.   My cruising has taken me to the Mediterranean, the British Virgin Islands, the San Juan’s and the Gulf Islands. I have enjoyed racing with other women, including skippering and crewing in the Ballard Cup Series and double handing with women in the Race to the Straits. I am attracted to the challenge of races like Swiftsure and Round the County, but I also like to have fun in the summer time at Whidbey Race Week. I love the mental, physical and emotional challenge that sailing presents. Sailing has filled my life with much joy and so many wonderful stories. I hope to share that with my students.