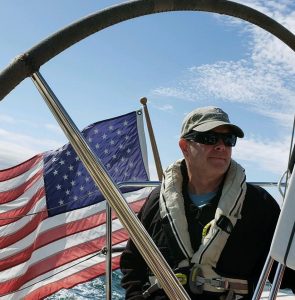 I started sailing in the late 1980s by patching together an old Prindle 18 in Southern California and sailing and crashing it extensively on numerous local lakes.  I was only able to sail occasionally during my career flying combat rescue helicopters and instructing aircrews in the Air Force, but after retiring in 2013, we moved to Seattle and jumped into sailing with both feet.  I pursued my ASA certifications and started racing at every available opportunity. I have done most of the major races and regattas in Puget Sound and the Salish Sea since that time multiple times on a variety of boats.  Some highlights of my sailing experience include competing in the 50th Anniversary edition of the Vic-Maui race in 2016, and sailing down the West coast of Vancouver Island in 2018.  I have been an ASA certified instructor since 2017, and currently hold a USCG 50-ton Master certification.  My goals as an instructor are to help each student to gain the confidence to get out on the water on their own and to have as much fun as we can while doing it.